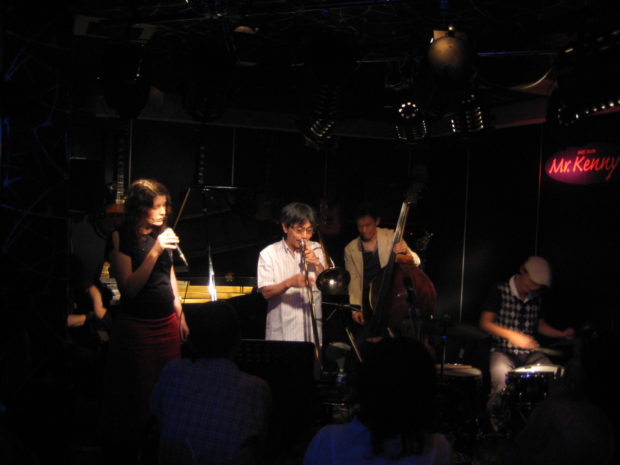 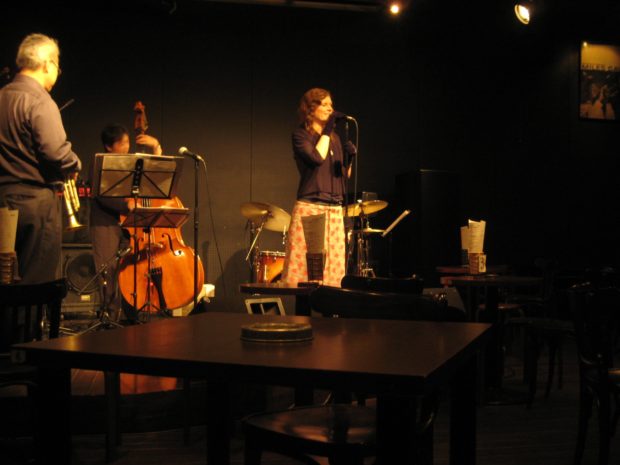 The first thing I notice is the sound of a sparse bass line, then the melodic wash of electronica begins and a metallic voice soars effortlessly across the two, improvising, speaking through the trumpet. The sound both calms and creates bobbing heads of the festive crowd at the Plastic Factory, a girl staggers in a skimpy santa claus outfit while others have their faces painted. A photographer takes random photos, which punters can buy by donation.

The music floats across the background of the quickly-growing crowd and draws everybody in with its subtlety. Applauds don’t happen until the third song, they are so long, people aren’t sure where they begin and end. The band, Echolocation, from Tokyo, to put it simply plays beautifully sparse and seductive music, as though in a dream: intriguing though not dominating.

Massa Takemoto takes care of composition, bass and computer and Testsuroh Konishi plays trumpet . They are gentle men with a good feel for melody and keeping rhythm within a sparse playing field – a very difficult thing in my opinion. It’s easier to jam numerous notes into a song and have them sound okay then one or two and keep interest.

I fortunately now own their CDs from previous projects, echolocation is a new project, and they are sublime. Please check them out: Desert Island Mix (Massa) and Blue Ground Music (Tetsuroh). I look forward to future creations from either artist.

Dee Dee came out on stage in a short, tight sequin number with a low back and had shaved her  head, completely. Her muscular back held the entire operation together: piano, bass, drums, sax and she grooved across the stage like she was in some kind of trance. When Dee Dee sang it was so powerful and bluuuuuuusey, so effortless.

It’s reassuring to see even the jazz greats have trouble getting a Japanese audience to respond. “You’re soooo quiet,” she said one time of the polite, restrained applause. Then she did a raggy version of ” Them There Eyes”, inspired by New Orleans, and the crowd pepped up. “Ah now I got ya!  You liked that one.”

Dee Dee channelled Billie Holiday during the tribute event (her new album coming out next February is a collection of Billie songs) and added an extra spice of sassy. Her entirely physical response to the music is enthralling to watch: her whole body moves to the music she so obviously loves. At 60 years old, Dee Dee is a reminder of the power that music can have over us all.

A beautiful, if somewhat stiff, quartet:  Enzo Gomez (piano), Ira Coleman (bass), Bruce Cox (drums), Craig Handy (sax, flute). Handy was demonstrably the newest member; he didn’t communicate as well with Dee Dee. The musos loosened up towards the middle of the set though (as did the audience), and after Dee Dee ordered a “refreshing energy drink” of campari, rose water and earl grey tea. A nice mix that the band enjoyed during an on-stage tasting session. Dee Dee had a hard time finding anyone in the audience to ‘kampai’ with; anyone that was drinking alcohol that is. One couple were drinking champagne. “Ah, the lovers,” she cooed.

A powerful woman with a powerful voice. 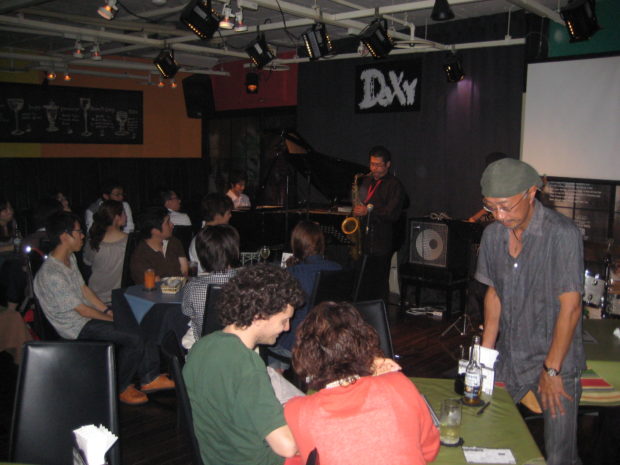